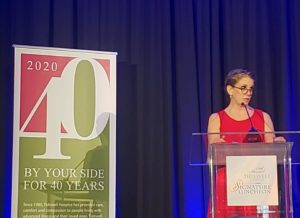 We are proud to support of Tidewell Hospice and their mission to provide quality care to patients and families living with advanced illness, while honoring human dignity and personal choice. We sponsored their 11th Annual Signature Luncheon on February 20, 2020 at Ritz-Carlton Sarasota. Melissa Gilbert, actress best known for her role as Laura Ingalls Wilder on the hit show Little House on the Prairie, was the keynote speaker.

An acting career spanning 45 plus years, Melissa has starred in over 50 television movies and feature films, including “Stand By Your Man;” “Sweet Justice,” which she also executive produced; and “Secrets and Lies.” She is the youngest person to receive a star on the Hollywood Walk of Fame. Melissa moved behind the camera as a director and continued acting on the screen and stage. She served two terms as the 23rd President of the Screen Actors Guild, two terms as Vice President on the AFL-CIO Executive Council and was Vice President of the California Labor Federation.

As a children’s hospice advocate, Melissa decided to “dedicate my life to ensuring that all chronically and terminally ill children get to live and die with gentleness, dignity and the grace that they deserve.” She served as the President of the Board of Directors of Children’s Hospice and Palliative Care Coalition (CHPCC) beginning in 2007. In 2015, CHPCC joined The Coalition for Compassionate Care of California (CCCC) to develop a united voice in public policy at the state and national level. Melissa received the Humanitarian Leadership Award in 2008 from the National Hospice Foundation in recognition for her work on behalf of children facing life-limiting conditions.

Melissa has dealt with death from a very young age, losing her adoptive father in 1976 and other family members and dear friends. Due to her personal experiences, Melissa developed a strong connection and desire to help children, the most vulnerable, suffering from advanced illness, grief and bereavement.