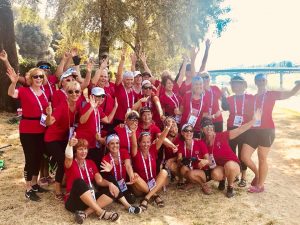 Legal Assistant Jackie Mori and her dragon boat team Survivors in Sync placed fourth at the International Breast Cancer Paddlers Dragon Boat Festival in Florence, Italy. This team trains incredibly hard and it has paid off.

“It’s been incredible,” coach and steerswoman Angela Long said by phone Tuesday from Italy. “Florence was beautiful. The parade of nations Friday night — it’s always a moving experience. People lining the streets and cheering you on.” 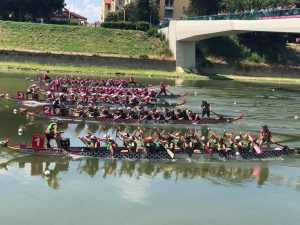 The 20 paddlers, plus Long steering and a drummer, are aged 48 to their mid-70s, with the average of the Survivors in Sync team in their early 60s.

In Saturday races on the Arno River, the crew put up a time that placed them in races with the top boats for the rest of the event.

In the final race Sunday, the Sarasota team covered the 500 meters in 2 minutes and 22 seconds, good enough to tie for fourth with a boat from the host country.

The Canadian crew in first place was coached by a Long mentor and a part-time Sarasota resident, Kathy Levy, Long said. A New Zealand team finished second and another U.S. team was third. The Sarasota boat was only 2 seconds behind the first-place boat.