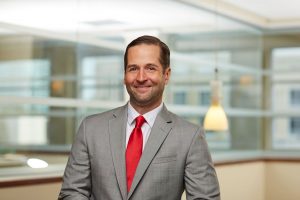 Will, a 2007 graduate of Leadership Manatee, is a principal attorney at Blalock Walters, focusing primarily in the areas of real estate and land use, zoning and development law.

His community service has included serving on more than a half-dozen nonprofit boards, including the Manatee Chamber of Commerce and the Lakewood Ranch Medical Center.  He has been the chair of the board for Meals on Wheels Plus of Manatee, the City of Bradenton Downtown Development Authority and 12th Judicial Circuit Nominating Commission [nominated by Gov. Scott].   He is also heavily active in the Goodwill Manasota Veterans Task Force and the Manatee Food Bank.  Robinson was also named “40 under 40” in 2014 by the Business Observer and “People to Watch” by Biz(941) in 2015 and is a graduate Leadership Florida, Class XXIX.

The award, developed 23 years ago after Kent Schulz died of cancer, was presented at the association’s annual meeting and luncheon at the Manatee Convention Center.