Bob Blalock to be Recognized at Manatee Chamber Annual Dinner 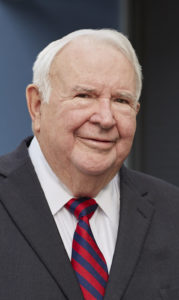 When the Manatee Chamber of Commerce has its 60th Annual Dinner on Feb. 2, it will have a distinctive Pittsburgh Pirates flavor. Incoming chairman Jeff Podobnik, the senior director of Florida and Dominican Republic operations for the Pittsburgh Pirates, will be replacing outgoing chair Rick Bisio. And Robert “Bob” Blalock, who will receive the 6th Annual Robert P. Bartz Award for Outstanding Leadership, is credited with playing a central role in keeping Pirates spring training baseball in Bradenton.

In 1989, the Pirates indicated they were prepared to leave Bradenton if something wasn’t done about McKechnie Field, which at age 66 had fallen into disrepair and lagged behind amenities offered at other spring training sites. In response, Blalock, an attorney with the Blalock Walters law firm, chaired a Manatee Chamber of Commerce baseball stadium task force.

The chamber recognized the economic importance of Pirates baseball, and the serious implications if spring training games were lost. Bradenton’s major league spring training heritage dated back to 1923 with the St. Louis Cardinals’ Gas House Gang (Leo Durocher, Dizzy and Daffy Dean),followed by the Boston Braves, the Athletics and finally in 1969, the Pirates. “McKechnie Field is quaint and attractive but behind the times, especially with eight to 12 new baseball stadiums in Florida,’‘ Blalock said at the time.

The task force helped bring about a series of stadium improvements and keep the Pirates in downtown Bradenton. In 2016, McKechnie Field, won the Best of Ballparks contest for Grapefruit League facilities in a poll conducted by Ballpark Digest and Spring Training Online. In 2017, McKechnie Field was renamed LECOM Park, after the college which trains osteopathic physicians, dentists and pharmacists at its Lakewood Ranch campus, acquired the naming rights.

The Bartz Award celebrates the legacy of the late Bob Bartz, who was president of the Manatee Chamber for almost 35 years until his passing in early 2017. “Bob Bartz’s record of success for 35 years as leader of the Manatee Chamber speaks for itself . My receipt of this award is very meaningful to me,” Blalock said in a press release. For more information visit ManateeChamber.com/AnnualDinner. The event will be held 5-9 p.m. Feb. 2. Tickets are available by calling the Manatee Chamber at 941-748-3411.